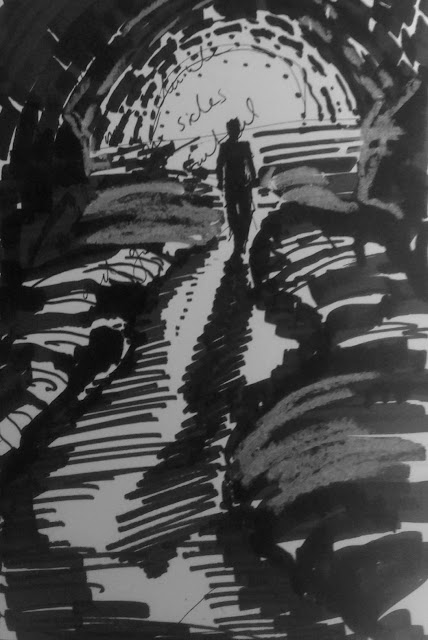 To walk a path and not deviate.
Watch the sides
watch where your feet fall
And be on guard

[For full chapter, click here
After  "many days", Joshua "old, coming into days," calls the people together in a farewell speech that echoes, in many ways, Moses' final address to the people. As in the desert, the "elders" the "judges"  and heads come together. Here, the Shema prayer command to "love God with all your heard and all your soul" is recreated for people that experienced not the Exodus, but the coming into the Land. Now the people will know "with all their hearts and all their souls" that God has fulfilled his promise.  Everything is embodied in space. "I am going the way of all flesh," Joshua says, and proceeds to speak of following a path, from which Israel must not deviate. Th relationship to God can be "seen" (r'e')--one of the leitwords of the chapter.
The other keyword is "to guard." Again and again, thhe duty is defined by the negative, what must not be done. "do not deviate" "do not enter" "do not worship and bow to them." The path outwards is the channel left between the warnings: "for to your own God you will stick". Hovering in the background is the threat of disembodiment, of becoming "lost from upon the earth" that has come to define everything]

Posted by Batnadiv at 2:10 PM No comments: 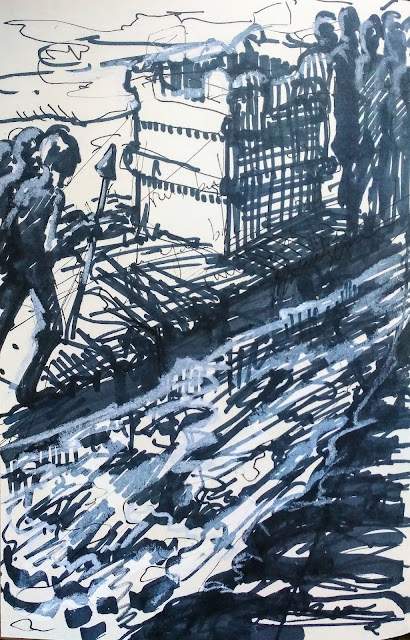 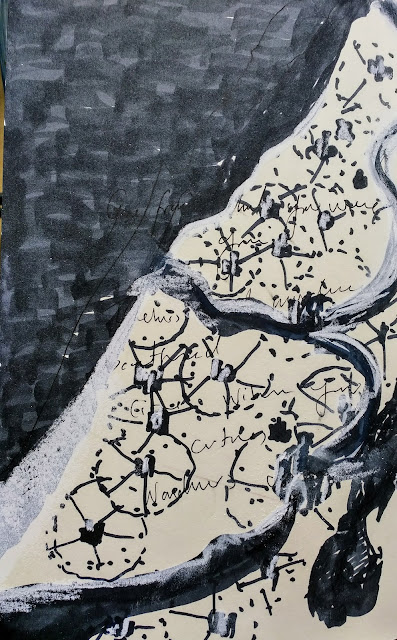 [For full chapter, click here
After the setting aside of the cities of refuge comes the final allotment: the giving of the cities to the Levites. These two sets of cities are intimately and mysteriously related. Both must be "given" (the leitwort t'n, repeated again and again in this chapter) as a gift from the tribes from within the inheritance that they were "given." Both are scattered throughout the entire country, buried within the tribes. Both are presented together: if in Numbers, the move from Levite cities to cities of slayers, here we move from the city of the slayer to the cities of the Levites. Finally, all the cities of refuge are actually Levite cities--a fact that is emphasized again and again by the refrain "city of refuge for the slayer.."
We need to know that these cities do not only offer refuge--they offer refuge specifically to "killers", who will be free to return home from their exile with the "death of the High Priest from the tribe of Levi.
Which returns us to the initial pronouncement that Levi would have no true inheritance: when Jacob, back in Genesis, curses Levi and Shimon's "swords," saying that they will be "scattered throughout Israel." Shechem, where Levi and Shimon used their swords here tellingly becomes a "city of refuge for the slayer." Levi's "Inheritance" is God, and so he remains unrooted, linked to the wandering Mishkan. But Levi is also a slayer, marked like the wandering Cain, offering refuge to other slayers that might still be redeemed.
The cities of the Levites, with the cities of refuge scattered within them, doorways ready to admit fugitives who beg entrance, represent the continued desert encampment within the settled land--the spaces for the unsettled wanderers who must be given temporary place.]
Posted by Batnadiv at 10:51 AM No comments:

Trace a line from here to there
from where you started
to the doorway where you stop
beg entrance
within the walls
within the streets
within the home.
Grant me place.
Swallow me down your long long tongue
hold me safe in your gullet
digest me in your juices
till death on more death sets me free.
Posted by Batnadiv at 10:20 AM No comments: 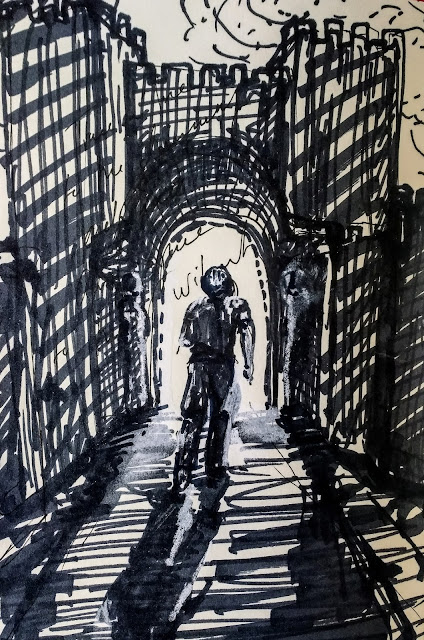 Trace the line to the gateway, and back
into the city, into the door of your own home
give place to the exile
the man out of place

[For full chapter click here
The growing focus on cities climaxes here, with the command to re-appoint the Cities of Refuge dedicated by Moses, adding now three additional cities on the western side of the Jordan. If the inheritance of the Land is "given" by God, these cities of refuge are "given" (20: 2) by the people, who "give" a place to the refugee involuntary murderer. These are human places within the expansive space of the Land--and they are specifically "cities" (the leitword of this chapter, defined by human boundaries, with a "gate" manned by elders and overseen by a court.
If the previous accounts of the cities of refuge (Numbers 35, focused on the question of the man-slaughterers relative guilt, this account focuses on the passage into and out of the city--continuing the Book of Joshua's focus on transitional spaces of entrance. The manslaughterer must approach the liminal gate, until he is "gathered into the city" and "given a place to sit (y'sh'v). His return (sh'v) from exile is also defined through the city, the wordplay of sh'v / sh'v highlighting the parallel: he is to return to "his own city, the city he left."
The setting aside of the cities is a watershed. Back in Deuteronomy, Moses defined taking responsibility for cities of refuge as the moment when the land truly becomes "yours." It is the sign of a completed conquest. In dedicating these cities, Joshua is indicating that "God has expanded the boundaries" of Israel's territory.

Posted by Batnadiv at 9:08 AM No comments:

Walk, measure, name.
What do I see when I see you
turn, twist, hit, rise, drop,
leave and then return?
Sarid, I call you, remnant of a dream.
Sheva, satiation. Water welling. Where I swear, trust me,
what is born, what will be born, what God will bear
Molada, be my moledet,  birthplace I fled, birthplace
that calls.
Be  body, be belly, a place I can sleep,
the navel I came from, to which I am linked.
House of bread, house of sun,
springs of red and white,
water sharp as steel, sweet as fruit.
Mishal, what I ask for. Amiad.
Broad of shoulder, full of breath,
An ever receding sky, afek, afek.
Yavne’el, God will build. El’Tolad.
Marala, Timnah, Idalah.Adama. I say, land, earth. Adam.
Over there, at the hight, Ramah.

Posted by Batnadiv at 9:49 AM No comments: 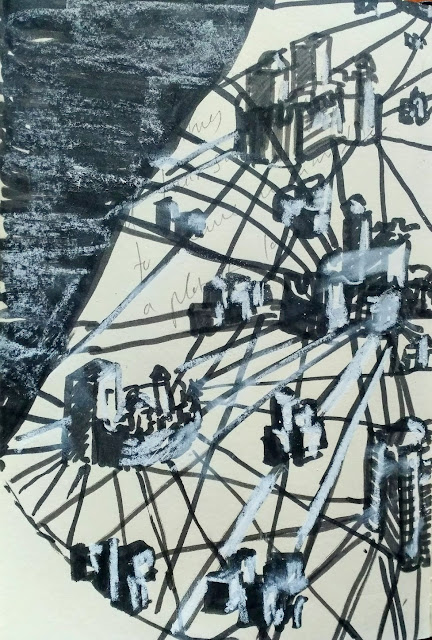 [For full chapter, click here
This chapter continues allotment, the "lot / destiny" (goral) "falling" in an order that moves from the children of Leah, to those of the maidservant, Bilhaa and Zilpa.
There is a fundmanetal difference between the inheritence of Simeon, and the allotments that came before. No trancing of a border that rises, falls, goes out and come in like a living thing. Instead, Simeon is swallowed "in the midst of the inheritence of Judah," and his inheritence consists of a list of cities "and the fields around these cities. This is the inheritence of the tribe of the Children of Simeon." Simeon's inheritence seems closer to that of Levi--"who does not inherit within the land", but is rather granted cities and fields--than to that of the tribes whose allotment preceded his. The early history of the family of Israel in Genesis which so impacted the inheritence of Judah and Joseph continues to resonate in this  return to the land, as Jacob's final curse of Levi and Simeon is expressed in their scattered inheritence.
This focus on cities continued to play out in the rest of the allotments , which all close with an enumeration of cities and villige which make up "the inheritence of the tribe." Cities, and the uber-cities-- fortresses--are at the center. The "writing" of the landscape by the surveyers who set up to walk and divide the land  has transformed it to a human space, with a focus on its  acculteration, the shaping to human needs.
The focus on cities and kings, that has accompanied this book since its opening, here seeps into the until-now nomadic Children of Israel. In thedenumoix, the Children of Israel grant Joshua his inheritence: a single city of his very own].
Posted by Batnadiv at 11:20 AM No comments:

Email ThisBlogThis!Share to TwitterShare to FacebookShare to Pinterest
Labels: commentary, Joseph and his brothers, Joshua, Land of Israel, tribes

Feel the earth:
crumble of soil between your toes
jab of rock against your heel
grit rubbing against your skin.

Watch the trail that stretches away behind you
Shadowy hillocks,
five toed valleys
marking you passgae
from here to there
from where you came to where you go
gaze beyond the horizon

Looking out
the land is filmed
over with the letters of your name.
textured with your skin's veins.
Posted by Batnadiv at 9:49 PM No comments: