what the eye does not see
what the hand does not do
trickles through the stony soil
to the untouched reaching roots
that trail their long fingers
onwards
seeps out through the stream
that will not wash clean
Posted by Batnadiv at 11:12 PM No comments: 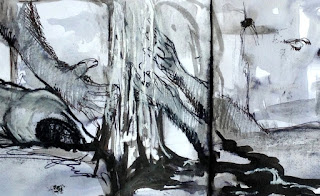 Posted by Batnadiv at 1:54 PM No comments:

Always, at the threshold
Woman, earth, and tree

Always the constellation,
with the gleaming

Always her arms,
her fingers curled in tight buds

Always the blossoming of her belly
a room expanding to hold

like the earth always beneath
calling to your feet

Always the question:
Will you rest in her arms?
Will you take the fruit?

Waiting to be given
Waiting  to be taken

Posted by Batnadiv at 4:23 PM No comments: 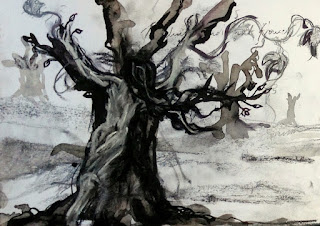 Expand and contract
follow the pulsing arteries
the beating blood
run, run, from the heated heart.

Redeem your blood
redeem your cells
redeem the membranes
between your fingers
between knuckles and nails,
redeem what fell,
what you could not hold,
gather it all back in
within the walls

to that primal bound
that first line
before you were you
where self and mother
were one
Posted by Batnadiv at 4:20 PM No comments: