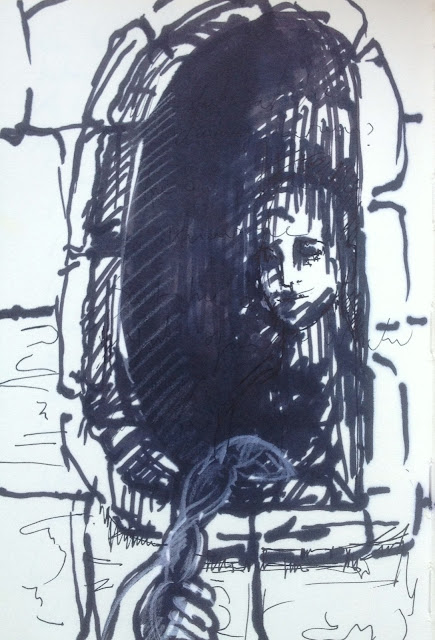 What keeps watch at the doorway, between?
Are you penetrable,  knowable?
Shut the door,  yet open the window
Give me a sign.

[For full chapter, click here
This chapter continues the focus on theme of transition, which here is given a tangible embodiment.
We begin with the transition between Moses to Joshua. Joshua acts as Moses,  sending out spies. Yet this time, in a successful reiteration, Joshua sends only  two--a recreation of the successful spies, Caleb and himself. The other ten spies are forgotten.
We move on to the transition between the Encampment and the Land.  The spies are to scout out "Jericho, and the land", looking both at the countryside and the city. They stop at the liminal space between the two--the house of Rahab, who lives within the city wall itself, straddling the separation. Rahab becomes the key to the spies success in Jericho, straddling metaphorically between Israel and the inhabitants of the land. It is she who gives the spies their information. And saving  their lives, she demands to be saved in turn. Her literal liminality indeed becomes the key to salvation: she saves the spies by lowering them by rope out her window, and is saved in turn by hanging a "red thread" in her window. This thread, tikvat (lit. 'extension' 'hope') hut ha-shani, signals a way forward, and opening for hope.
Rahab not only lives in a liminal space--she herself is a liminal space, an entrance waiting to be penetrated. The language of the chapter is unremittingly sexual.  Rahab is described as a zonah (which means both innkeeper and whore). The spies "come to her" (repeatedly) and "lie there" in her home; she is told the spies have come to "plow" the land; and she repeatedly speaks of "knowing" (the carnal daat) and "not-knowing."  Indeed, there are many echoes of the Sodom story, with its threat of sexual violence. Rahab's advice to the spies to flee "to the mountain" echoes the angels' advice to Lot to "flee to the mountain" (hahara nasu).
Yet it is Rahab and her family who actually play the part of Lot, saved from the destroyed city. In  saving the spies--"sending them forth", as Joshua had "sent" them --Rahab metaphorically opens herself and the city up as conquest. In exchange, she is granted a protection that echoes Israel's protection in Egypt during the plague  of the firstborn. By marking the limen, she is set aside].
Posted by Batnadiv at 9:51 PM No comments:

Hold me tight
as I hold on to you

seeing you in
the palm of my hand
the sole of my feet
I fit my foot to your footstep
disappearing over the plane
winding up the mountain.
Can I be you—
You, whose loss is path I cannot trace
I search for your face
that saw face to face
while I see reflections
in the murmuring waters
separating between us
you carried between rushing reeds
you carried over the deeps
as I wait at the bottom
listening to a distant roar
till you appear
face a beacon
blinding.
as the distant mountaintop
how can you be quenched and dark
how can I rise
and take what you never got
barred at the river.

Do not leave me 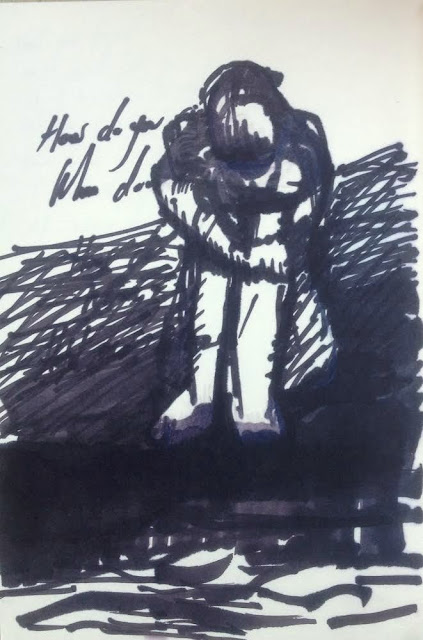 How do you rise when down? How do you learn to walk? Hold me please!

[For full chapter, click here
"And it was after the death of Moses, servant of God"--these words open the new section of the Bible, and are definitive of the new era. Again and again, the chapter emphasizes that "Joshua, minister of Moses" draws from the remnants of his master. The land will be given "as I spoke to Moses"; God will be with him, as He was "with Moses"; the people will obey him, as they "obeyed Moses." He seems to have no presence or will of his own. This sense of diminished potential is reflected in the grammatical structure of the chapter, which is dominated by negative ( lo) rather than positive forms. The word rak--only--is repeated throughout.
Yet within this crushing ambiance of loss, God exhorts Joshua to "rise". He must learn to walk, to move beyond the stasis of drawing from Moses. His relationship to the land will be defined by where "the sole of [his] foot falls." His wisdom will come through movement, "in every way he walks." Only then will his "path succeed."  God's exhortation is dominated by the leitworts "walking" (l'kh) and "path" (derekh}. And indeed, Joshua moves on to order the Children of Israel to prepare to move.
Learning to walk is not easy. Again and again, God promises not to let go--"I will not loosen My hold, and will not leave you." On his part, Joshua must--as Moses exhorted him back in Deuteronomy--"Be strong and have courage." ]

Posted by Batnadiv at 8:38 PM No comments:

As many of you know, I had a bit of a crises when I finished Deuteronomy--and with it the first section of Bibliodraw. The Pentatuch, hamisha humshei Torah, are a unit in and of themselves, with unifying patterns, cross reference, and a continuing narrative.
After completing Deuteronomy, I tried to continue immediately with the Book of Joshua. I couldn't. The move from the stunning poetry  and complex narratology of Deuteronomy to the simple, bloody story of  Joshua was jarring.

I could barely get myself to pick up a pen. My mind and heart were still caught up in the first section of Bibliodraw: the links between the books, the development of the narrative, the development of the imagery.
I decided to take a break, and focus on integrating what I had so far.
In the meantime, Bibliodraw was featured in two important exhibitions--one in the Senate Gallery in Ben Gurion University, the other currently up in the Mishkan Museum of Art in Ein Harod. This gave some closure. Add to that a baby, a move, and a new job, and I feel it is time to move on.
With much exhortations from my brother Oriel, I have finally decided to pick up the gauntlet.
For this book, I have decided to use black marker. The monochromatic palette will create a  visual link to Deuteronomy, emphasizing that the Book of Joshua picks up exactly where it ends off. This is the sequel.
the simplicity of the marker does not allow too much fine detail, which i think is appropriate for the simple language and narrative of this book
Bibliodraw Part II, here we come.
Oriel, this one is for you!

Posted by Batnadiv at 8:09 PM No comments: