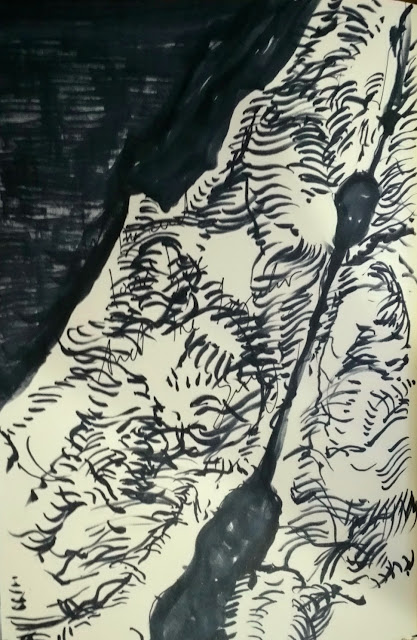 In the end
look back
and tie it together
with song

[For full chapter, click here
In the last chapter, we begin with sepcific battles that wind into years of warfare; there is a sense of unfolding chaos, the time that passes until the "country rests from war."
This chapter, by contrast, offers a retrospective view, looking back at those blurred years of war in order to place them in context and give them form.. The nameless cities are now enumerated by name, in a repetative, rythmic litany that places all in order.
Only now, looking back, can the seperate conquests of Joshua and Moses be seen as one, as succesive steps in a single process: "these are the kings whom the Childre of Israel smote, and posessed their land beyond the Jordon, toward the rising sun..." "these are the kings of the land whom Joshua and the Children of Israel smote beyond the Jordan westward...for a possesion according to their devisions." Now,  the focus on kingship tht characterizes the Book of Joshua reaches backward to redefine Moses' victories in Deuteronomy.
True, Joshua is more directly associated with warfare, while Moses remains the "servant of God"; true, Moses gave the land as "inheritence", while the westward lands remains to be divided. But for the first time, teacher and student are completly interlinked, working together to acheive the posessions of the two sides of the Jordan.]