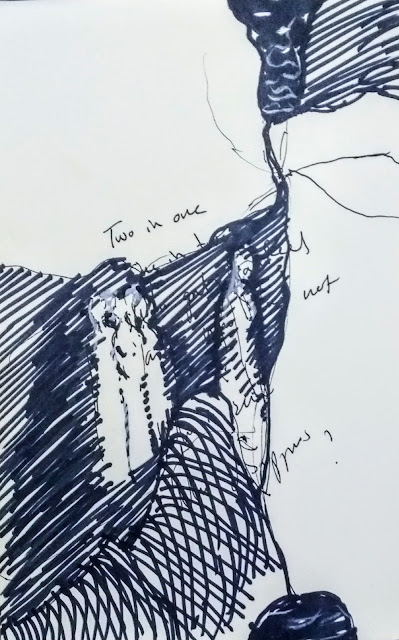 Two or one
One or two
Who gets counted
Why does not
Who is seen
Who disappear?

[For full chapter, click here
This chapter continues the allotment of the tribe of "Joseph" begun in the previous one, this time detailing the inheritence of the children of Menasseh, "the first-born of Joseph". The themes of the previous chapter continue to resonate, becoming more explicit and extreme. The strange doublness of Joseph--both a single tribe given a single inhertence, and a double tribe receiving a dual inheritence, here comes out into the open. The inheritence of Josph is framed by this question of singlness and duality: the previous chapter begins by defining "the lot for the children of Joseph" before breaking off to define the detailed inheritence of Ephraim; this chapter follows the details of the inheritece of Mennasseh with the "sons of Joseph" coming to complain "Why have you given me one lot and one plot for an inheritence?" The schitsophrenic split between individuality and group identity is reflected in the syntax: even as the tribe of Josph demands a dual inheritence, they speak of themselves in the singlular--"Why did you give me". The utter intertwining of these two tribes is emphasized in the details of Menasseh's inheritence, which is punvtuated by cities that belong to Ephraim. We cannot detail his allotment, without detailing his brother's as well.

On the other hand, the dulaity of Josph's inheritence is here further exsaserbated by the fact that Menasshe is split in two, effectivly inheriting two different sections--one on the west side and one on the east side of the Jordan. The eastern section goes to "Menasseh's first-born", drawing attention to that strange insistence in teh opening verse: "Menasseh, the first-born of Joseph." Indeed, biblically, the first-born is meant to inherit an extra portion. Jacob, in his love to Joseph, gave that double portion to him.  We return to early history of the tribes in Genesis, which has been resonating in teh background since "tribe of Judah" first "approached Joshua-of-Joseph. When Joseph brought his two children to be blessed by Jacob, Jacob gave preference to Ephraim over Menasseh, and Joseph protests, insisting on Menasseh's promigeniture. Both elements continue to resonate here, in the allotment of these tribes. Ephraim is indeed given presedence to Mennaseh, but then the text return to insist that Menasseh is the first born. This contested promigeniture is central to the tribe's identity: this is the only place where the "first born" of a tribe gets a serperate inheritence, neighboring Reuben, another displaced eldest.

Yet in addition to the continued agon with Ephraim, Menasseh's inheritence introduces a completly new element: the question of female inheritence. For the first time, when counting the "children" of Menasseh, the chapter goes out of its way to explicate that they are "male." This is because for the first time, females are also inheriting. The daughters of Tzolphad rise from th ebackground, and break the default story of exclusivly male inheritence.

In doing so, they also allow for the recollection of the one child of Jacob who receives no mention in this story of inheritence: Dina, daughter of Jacob, who was raped in Shechem and then disappeared from the story of the family.  Menasseh's inheritence begins in "Shechem" (17: 7) and one of his sons is named for that city (and for Dina's rapist), "Shechem" (17 :2).   In the acknowlegment of daughters, her story begins to rise as well],

Email ThisBlogThis!Share to TwitterShare to FacebookShare to Pinterest
Labels: commentary, Jacob, Joseph, Joseph and his brothers, Joshua, Land of Israel