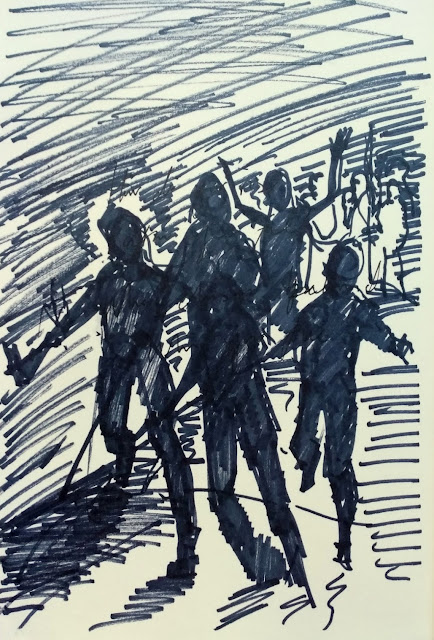 How do you rise
after the fall?
What chases behind as you flee?

[For full chapter, click here
From perfect victory we move to abject failure. If before, Jericho's heart melted before the approach of Israel, now the heart of Israel melts before the people of Ai. Joshua's rising fame comes tumbling down, as he "falls on his face" before God.
The opening of the chapter sets into place the reversal that is to come, contrasting Joshua's rising fame with the Children of Israel's desecrations of the herem. All is not well in the aftermath of the miraculous victory of Jericho. What stands out in this context is the conflation of the nation with the individual:

The secret sin of Achan is bracketed between two declarations of Israel’s collective guilt. The growth into nationhood is dangerous. Having crossed the transformative passage of the Jordan, Israel has become a single entity, and a problem in a single part can destroy the whole. No more are there incidental details. All is incorporated and impacts the nation.

The herem that closes the previous chapter establishes that the victory over Jericho did not come by human means. The city fell to the yovel call of the Shofar, while the nation was ordered to be silent. Like the Jubilee year, the disintegration of Jericho establishes that "the Land is Mine," and the city is "set aside" (herem) completly to God. Yet how is the nation to move on from this overwhelming revelation,  Joshua's diluted version of Moses' encounter at the Burning Bush?

Joshua attempts to recreate  Jericho by once again sending to spies to "scout out the land." Yet unlike the first scouts, who are careful to look at both "city and land," these second set of scouts immediately zoom in on the city of Ai. And unlike the careful reconnaissance that characterized the approach to Jericho, these  spies arrogantly proceed by approximation: “About two thousand or three thousand..." Not for nothing is Achan conflated with the nation as a whole. There overconfidence reveals that the lesson of Jericho has not been learned. Like Achan, who steals from the physical wealth of Jericho, the nation as a whole steals the aura of the victory over Jericho:  believing their own invincibility, they assume that the city is theirs to win.


This appropriate of God's action becomes a betrayal as deep, in some ways, as the worship of the Golden Calf in the aftermath of Sinai-- God's exchange with Joshua echoes His words to Moses as he is sent down the mountain.  Desecrating the herem is undoing the covenant. Israel "has stolen and also lied and also taken into his possessions." The attempt to appropriate the herem for oneself makes the herem spread like a contagion. Achan becomes an extension of Jericho, burned with all the possessions that drove him, as well as his family. Israel, which has also become herem, must physically exorcise their connection to Ahan, actively and ruthlessly cutting him out of the body politic.

The meagre objects, and their oversized consequence, become a physical embodyment of the danger of the God of Small Things, who makes no approxumates, and demands a confession of the very specific "this and this." ]
Posted by Batnadiv at 2:39 PM