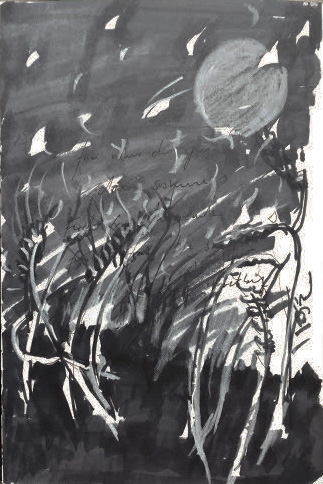 From whence do you draw sustenance?
Feed from the earth
feed from the sky
a time to say goodbye
and reroot

[For full chapter, click here
This chapter continues the theme of transition, but here we have exited the liminal space, and the change has become "complete" (t'm) (5:8) and definitive.

First, the crossing is complete, and its impact immediate: The passage into the Land through the dried river bed "melts" the hearts of the Canaanites." It is as though the the waters displaced by Israel enters into the very bodies of the inhabitants.  Rahab's prediction becomes fact: "no man has spirit to stand against them."

Even as Israel approaches contact with the people that dwell "to the west" of the river, the chapter goes out to create a complete separation. Joshua is commanded to circumcise all the sons of Israel. This creates a break not only between the children of Israel and the Canaanites, but between the generation of Israel that enters the Land, and those that came before them: "For all the males  that came forth from Egypt ... died in the wilderness by the way... All the people that came out were circumcised, but all the people who born in the wilderness along the way as they came forth from Egypt were not circumcised... For the children of Israel walked in the wilderness for forty years, until all the nation of the men of war that left Egypt was utterly gone (t'm)... and [God] raised their children in their stead, and those did Joshua circumcise" (5: 4-7).  Again and again it is emphasized that there has been an absolute break from Egypt. Those who have entered the land were born on the "way", in the liminal space of the wilderness.

The break between generations is emphasized by the keeping of the Passover, a re-doing of the exodus by the new generation that has entered the Land. The holiday of redemption becomes a celebration of entering rather than of leave taking. This transitional Passover allows the final break is from the liminal space of the desert itself. No longer will Israel be fed from the Moses' manna. The end of Passover also marks the end of the miraculous bread from the sky; the end of the not-quite-real existence of wilderness wandering . From now on , Israel will be fed from the Land itself.
.
The chapter ends by emphasizing the absolute break between Moses and Joshua, as Joshua sees the "Captain of the Hosts of God" in a vision that echoes Moses' revelation at the burning bush.  Like Moses, Joshua is told to "remove his shoes from his feet, for the land that you stand on is holy" (5:15). But the very similarity highlights the magnitude of the change: where Moses had a revelation that was "face to face", Joshua meets only an angel. The end of the manna is also the end of direct contact with God.]