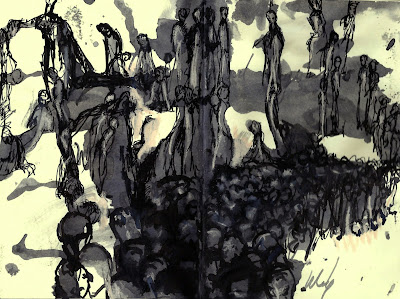 The close from the begining

Where  you come from


Placed within the web

[For full chapter, click here
After all the drama and devastation, we return to the beginning, once again--as in the opening of this book--taking a census of the tribes. Yet the opening verse also intimates a transformation : Moses is to count with Elazar, Aaron's son, rather than with Aaron himself. Death has left its impact, an d a new generation has come. What is hinted in the opening becomes explicit at the closing: "These are those who were counted by Moses and Eleazar...among them was not a man of them whom Moses and Aaron had counted when they numbered the children of Israel in the Wilderness of Sinai. For God had said of them, “They shall surely die in the wilderness.” And there was no one left of them..." This is the chapter of transition: the closing of the old, the accounting of the new.
Not only a replacement of a generation, it is also a placement. This is the census that is to define inheritance within Israel, even as it places every tribe within its history, going all the way back to "Reuben, the firstborn of Israel." Every incident is accounted for. Reuben is restored to promigeniture; Judah's two dead sons are remembered by name; even Korah is redeemed: "the sons of Korah did not die."
The new beginnings are placed within the web of what has come before. And the coming of the new restores and redeems what has passed]
Posted by Batnadiv at 9:21 PM