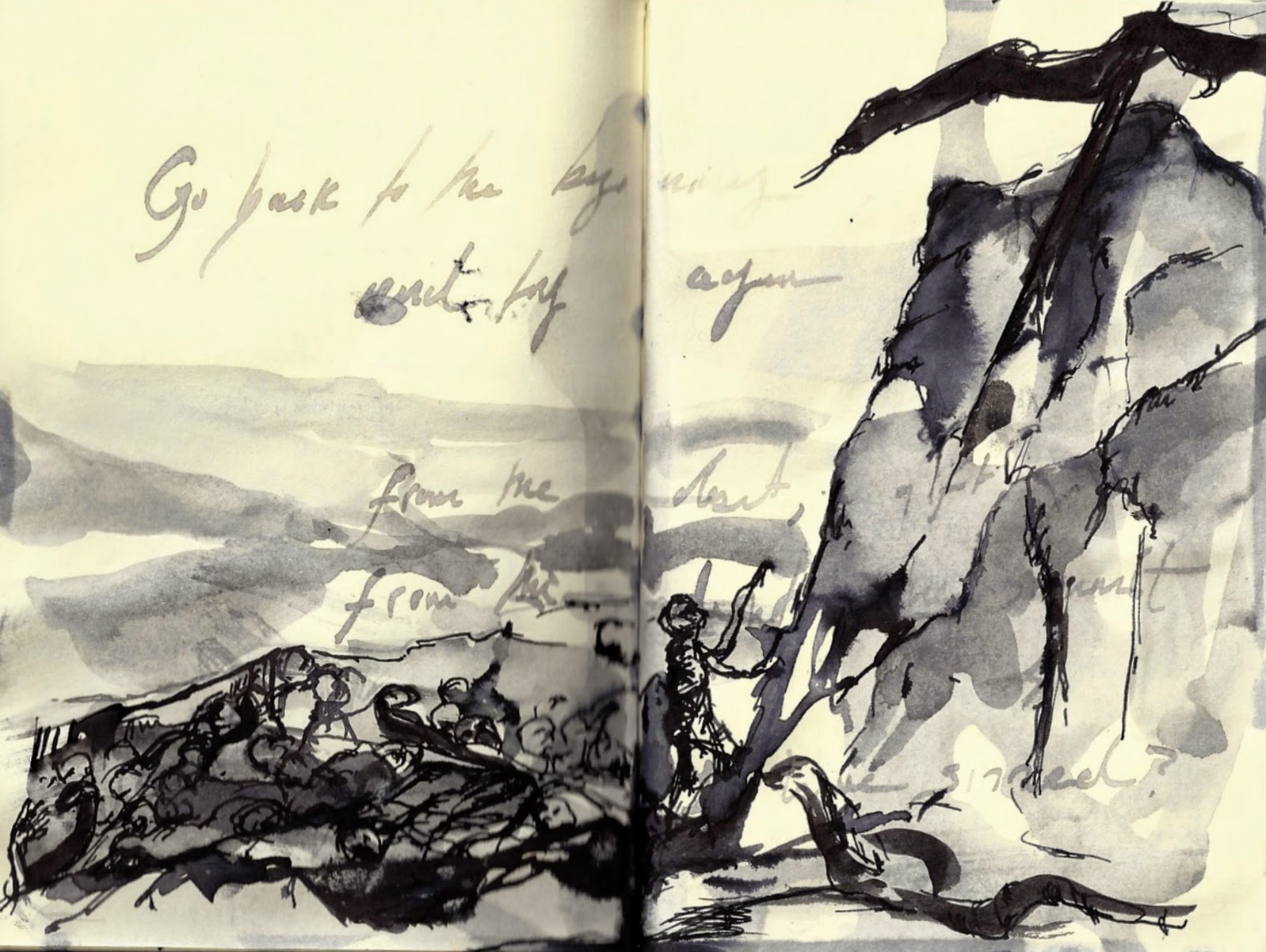 Go back to the beginning

From the desert, a gift
From the depths, the summit

When can you say,
I have sinned ?

[For full chapter, click here
The chapter continues the last, continuing and intensifying both its central strands:  the perilous approach to the Promised Land on the one hand. and the replay of the desert experience on the other.
In the previous chapter, the generation of the Exodus --as exemplified by Miriam and Aaron--are dying out. Yet the the rise of a new generation does not seem to promise renewal. What we have is rather a replay the aftermath of the Exodus, with the constant complaints about the lack of food and water. Here, though, we seem to go further back. The serpent that played so central a role in Moses' initial interaction with Pharaoh reappears,  In a hermetic, highly poetic section, mysterious "fiery snakes" come and attack the nation (in Hebrew, the language is musically alliterative: "nahash saraf ye-nash-hu""). Echoing Pharaoh's own language, the people beg Moses to "remove" the plague. Here, we return to the aftermath of the first time Moses brought forth water from a stone, in Exodus 27. Echoing the keyword of nes (trial, banner), Moses must make a "nahash nehoshet", a copper serpent, which will play the part of Moses' heavy hands in Exodus. The upraised serpent, like the upraised arms, offers salvation from attack. One change has taken place though: for the first time, Israel admit wrongdoing, seeing a "sin" in the complaints (tluna) that have played so central apart in this book: "We have sinned, in what we spoke about God and about you." (here, we perhaps are going even further back, touching on the primal sin in Eden itself...)

The other strand is the continued approach  to the Promised Land. After being rebuffed by Edom, the Israelites "circle" to avoid Edmoite land, and are attacked, first by the --first by the King of Canaan, then by Sihon and by Og. Here, we do see growth and new beginnings. Initially defeated by the King of Canaan, the Israelites bond together, and for the first time function as a single entity, rather than  a mob that "gathers" (k'h'l). "And Israel vowed to God... and God listened to Israel..." From that point out, Israel is victorious in battle.
The new independence and cohesion of the nation is perhaps best exemplified by the Song Israel sings. This is the most explicit recreation of the exodus, the language directly echoing the Song of the Sea--except this time, it is the nation rather than Moses that leads the Song: "And then Israel sang this song".

The preponderance of poetry in this chapter returns us to the previous chapter's focus on speech and narrative. If Moses was unable to "speak to the stone" and could not persuade Edom through narrative, here,  victory  is framed by  growing complexity of speech. The victory over Canaan is dependent on a vow; The battle with Sihon is introduced by the recitative from "the book of God's wars" and the Song, and is followed by the song of the moshlim, which also serves to to introduce the battle with Og.

If the mouth was venomous at the opening of the chapter, it is transformed into the key to salvation.]
Posted by Batnadiv at 2:47 PM