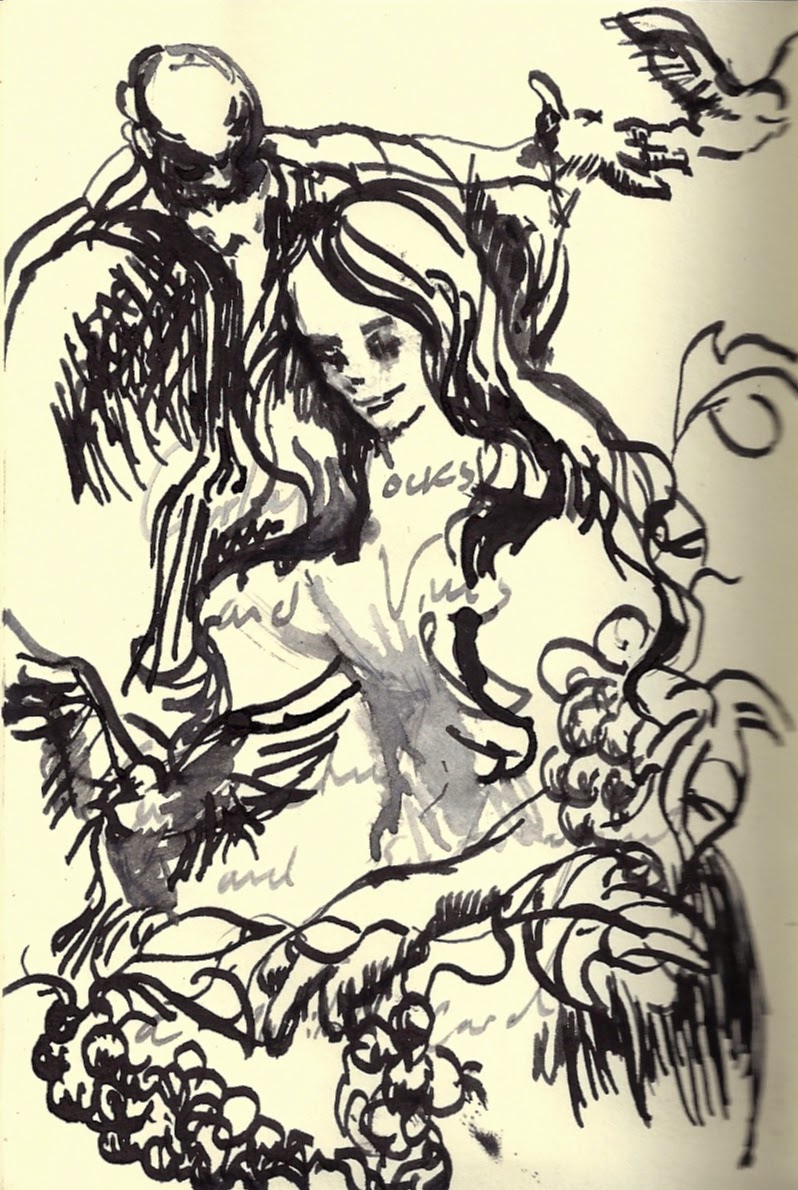 [For full chapter, click here
The chapter centers on the laws of the nazir (nazarite), a laden word that means "set aside," "consecrated" "crowned" "separated". The chapter plays with all aspect of the word, as the Nazarite is both "set aside" from wine, even as his / her hair is "consecrated"  to God.
We continue here with the translation of the laws of Leviticus into the world of the Israelite encampment. "If a man or a woman set aside with a vow to separate (n'z'r) themselves,  they shall be nazarites/separated (n'z'r) to God." This unusual root takes us back to Leviticus 22: "Speak to Aaron and his sons and let them separate (n'z'r) themselves from the holy things of Israel" --and indeed, many of the laws of the Nazarite echo the laws limiting the High Priests: The prohibition of coming into contact with the dead; the definition of the Nazarite as "consecrated to God"--which is the very inscription the High Priest wears on his head.
The Nazarite, like the priests at their consecration, stands at the liminal space of the "doorway," bringing the outside in, allowing anybody, male or female, to take on the status of the High Priest. It is a strange position, that is defined by holding back (from grapes) and by growing wild (the hair). Like Joseph, who is defined as "the apex, the set aside (n'z'r) of his brothers," the Nazarite remains separate, a wild card. He or she is not part of the system of consecration set into place  in Leviticus. They are driven from within, "going beyond" (yafli). Their hair "grows wild" (pereh)--a clear echo of the wayward wife (sotah) of the previous chapter, whose hair is made "wild" (parah). At the closing of the period of consecration, the Nazarite must bring a "sin offering" implying a dangerous position.
There are laden lexical links between the neighboring  sections of the wayward wife (sota) and the nazir ( both focus on hair, both use the word "wild", both hold out their hands to hold their offering (natan...kaf) ). This highlights the ambiguity of the status of the Nazir, but also open the question of the place of the wild and unconstrained within the encampment. The chapter closes with the priestly blessing: "God will bless you and guard you; May God light his face towards you and grace you (huneka--another clear echo of Joseph); God will turn his face to you and give you peace." Perhaps blessing requires the wild card, like Joseph who brings "the blessings of the waters above and the deeps lurking below."]
Posted by Batnadiv at 6:14 PM